For quite some time I’ve had quite difficult relationships with Berlin to say it nicely. Many of my friends would be surprised to read this but I have to admit that our relationships with Berlin has entered a new stage, for sure those are far from “complicated”. Most likely the times when I avoided Berlin for no particular reason are over. I could not explain these strong feelings of dislike and distrust but those were there and hiding them was not an option.

The journey to new beginnings was simple. For some time I felt that I need a break, time when I switch off from work, daily responsibilities and troubles of everyday busy schedule. I needed to take time just for myself, do what I want or simply enjoy life.

When I researched my potential destinations Berlin came as a last option and after a while for various reasons it became The Destination. I just wanted to give it one more shot, take our time, spend some time together and see where it will take us. Well, I didn’t expect the result but here it is – me and Berlin, we’ve found our common ground and at the end of the journey it was even a little sad to say Goodbye.

I’ve arrived in Berlin on the Black Friday, early morning, it was raining, including thunderstorm. Nice! Right? Well, hello Berlin! Dropped my bag at the hotel and off to explore the city. I’ve had some shops and parties in mind for Friday but rest should be for the mind and soul. To fast forward Friday as there is very little I want to share publicly – it was very busy day – thankfully I had an opportunity to have an important talk which left me a with too many emotions (mostly very positive) but it was the right time and the right place. I am very thankful for that. Later I allowed myself to dive into the decadent nightlife of Berlin which ended at 6am with breaking some insane personal record, meeting new people and enjoying freedom to the fullest. I am still surprised how I managed to stay awake until 6am (for 26h in a row) with zero alcohol and drugs, maybe an overdose of freedom.

After sleeping only couple hours as I went to sleep when I usually wake up, I decided to  spoil myself – with nothing fancy more with something peculiar, something Berlin is famous for. I lived in the heart of one of the gay neighbourhoods in Berlin so let’s see what it has to offer.

I ended up eating brunch at Das Café Einstein Stammhaus. Looks quite fancy but I read they are famous for their pastries. It is worth visiting just for the reason that they serve boiled eggs in the glass and their raspberry cake almost left me speechless. It is fancy but still Berlin fancy.

After literally spoiling myself, I’ve decided to use this time to do some shopping. After my body transformation I have almost no clothes that would fit me. I am the same just my clothes has became bigger and as I am no oversized fashionista there was a urgent need for Berlin infusion into my wardrobe. 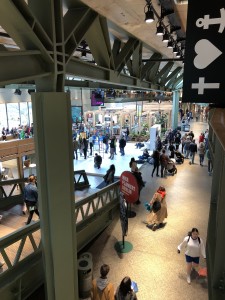 inter
national designer names. Hipsters paradise, so as mine. Bikini didn’t just surprised me with amazing and very very affordable shopping but with Banksy. There is an exhibition of The Art of Banksy. It should be a must for everyone who likes street and contemporary art. As I have little understanding of contemporary art but for the mainstream consumers of popular culture as me, Banksy 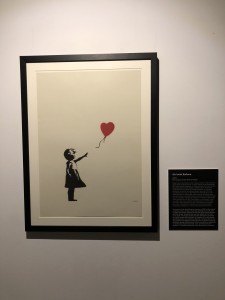 gives much needed injection of inspiration and extraordinary concepts. By the way exhibition will be there until January, 2019. Give it a try, it is nice and fun, unless you are very conservative then don’t go there (and then what are you doing here?).

If you want some affordable shopping don’t miss Uniqlo Flagship store in Berlin, which was my next stop. Finally I am in the size I look good in it. Though it is nice for all, but before I would not find much in there. By the way the store in Berlin is huge.

For the short bit I’ve entered KaDeWe and left fast. Couple years ago I would probably be beyond happy to see all those large and established brands but I felt more happy with less known and more personal stores at Bikini. Maybe I am just trying to run away from things which everybody “likes” and build something on my own.

For Dinner I’ve discovered Tiergartenquelle went there as I read it looks like a hole in the wall but with amazing traditional German food. Which is 100% true. It is located under the S Bahn rails. Within one of the arches of viaduct. It was packed but one of the advantages of traveling alone is that almost always there will be space for you. Berlin has also surprised me with the fact that almost everywhere you can find non-alcoholic beer. Even here where traditional German food is served in very Berlin style.

Later, I went to gay central of Berlin – Nollendorfplatz in Schöneberg. Funny fact that Berlin has several LGBT neighbourhoods and each is very different. One is very decadent, other hipster and other quite ordinary. Later I went to the art room Barbiche I had a lovely drink and chat with my new friend, she is soon come to Riga, to shake it a bit. I loved the spirit there, felt like small neighbourhood bar. It is very simple but same time filled with art and inspiration. Seems it was created very personal.

Next morning I returned to East Berlin, to have a proper Sunday 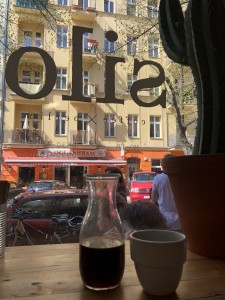 brunch. I needed a place which would serve a lot of avocado and lots of coffee. Silo Coffee has a great reputation in Berlin and to be honest it is worth every minute and cent spent. Again if you over one person I would advise you to book the space as it was packed. But the most important, for me as a coffee addict, meaning huge coffee addict – Silo was a heaven on earth.

Sunday treated me nicely in Berlin, it was warm and sunny so I decided to enjoy the Tiergarten. To catch some sun, to get some sun for my extremely white skin. Probably after I gotsome cold but it was worth. Looking at Berlin boys to enjoy the sun and pretending to be one as well.

I finished my trip with an amazing coffee place in Schöneberg.  I found it by accident as I was walking around killing my time and exploring the neighbourhood. Cafe Komine was the place, I passed it twice and there were no spots and then I passed it again – there was a nice spot outside and stunning Matcha cake. My God, that was Orgasmic.

So for this is it. I am surly thinking of coming back to Berlin. I am exploring some options and making some plans on what I could do and see. My next things I want to explore are event Pornceptual (I think the name says it all), I was just stunned about that concept which is so Berlin. My next neighbourhood will be Kreuzberg.

Even I got lost for plenty of times I loved it there and we have so much with Berlin.

So these are my songs of Berlin and in this mood I got the spirit to restart Imagine Nordic. If there is anything you would like to read about, let me know and comment.

See you next time!